A call for an improved, implementable boxing scoring system

We've been banging the drum for changes to the way boxing is scored and judged since 2017 when we developed the very first, rough concept of the Fightnight Scores system.

Back then, as now, we were tired of the frequent questionable and often outrageous scorecards being turned in and spoiling big fight events. We thought about how the system could be changed, or improved in ways that could be easily adopted within the sport.

The system was formulated based on simply the questions being asked by us, fight fans on forums and social media after a horrible, rogue scorecard surfaces following a big fight:
How did they get that score?
What were they watching?
Why did they score x round for y?

With a few additional bits of data, we believe our system allows a judge to answer those questions for every round. In turn, this information puts some justification into their scores, adds clarity and actually brings a judge some accountability. 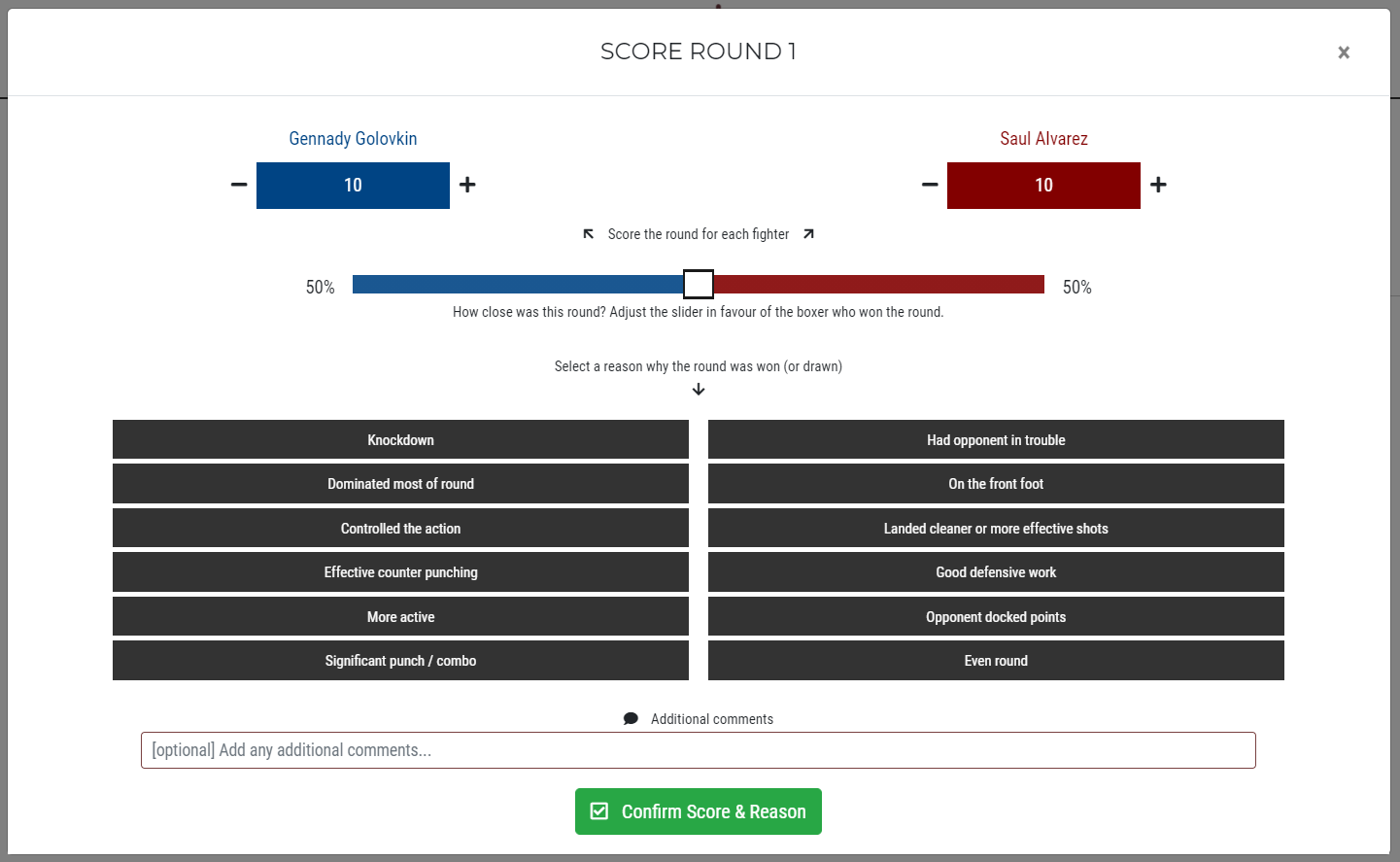 As well as awarding the rounds based on the 10-point must system. Fightnight Scores also requires a reason to be given WHY it was awarded the way it has been. We also require users to reflect how close each round is based on a percentage. For instance, a close round would be 55-45% to fighter A, or a more dominant round 30-70% to fighter B.

Another glaringly obvious improvement is the fact judges are still using pen and paper. It was 2017 when we were tacking these issues, technology has been adopted and embraced in pretty much every major sport in the world. Boxing is a dinosaur in comparison, and while broadcasters have used Compubox to reflect on stats for talking points, the actual authorities within the sport continue to do things the way they've always been done!

Some may argue that technology can go wrong, and using pen and paper is the tried and tested method. Others may point out that given the general age of those frequenting the judging seats, that they wouldn't be able to work the tech. But the age of judges is a whole other conversation in itself.

Another advantage to a modern, electronic system would be the elimination of the sometimes excruciating wait at the end of contests to tally up the scores. Often a contentious talking point amongst fight fans regarding the reasons for the delay!

It should be simple to put this system into place. Adding more clarity of the judges scorecards so we get some answers to what they are witnessing. It is also a timestamped record of their thinking and logic behind their scores. With this added information required, judges might just put more thinking into how they are scoring a bout if they know it could be scrutinised and questioned later on. 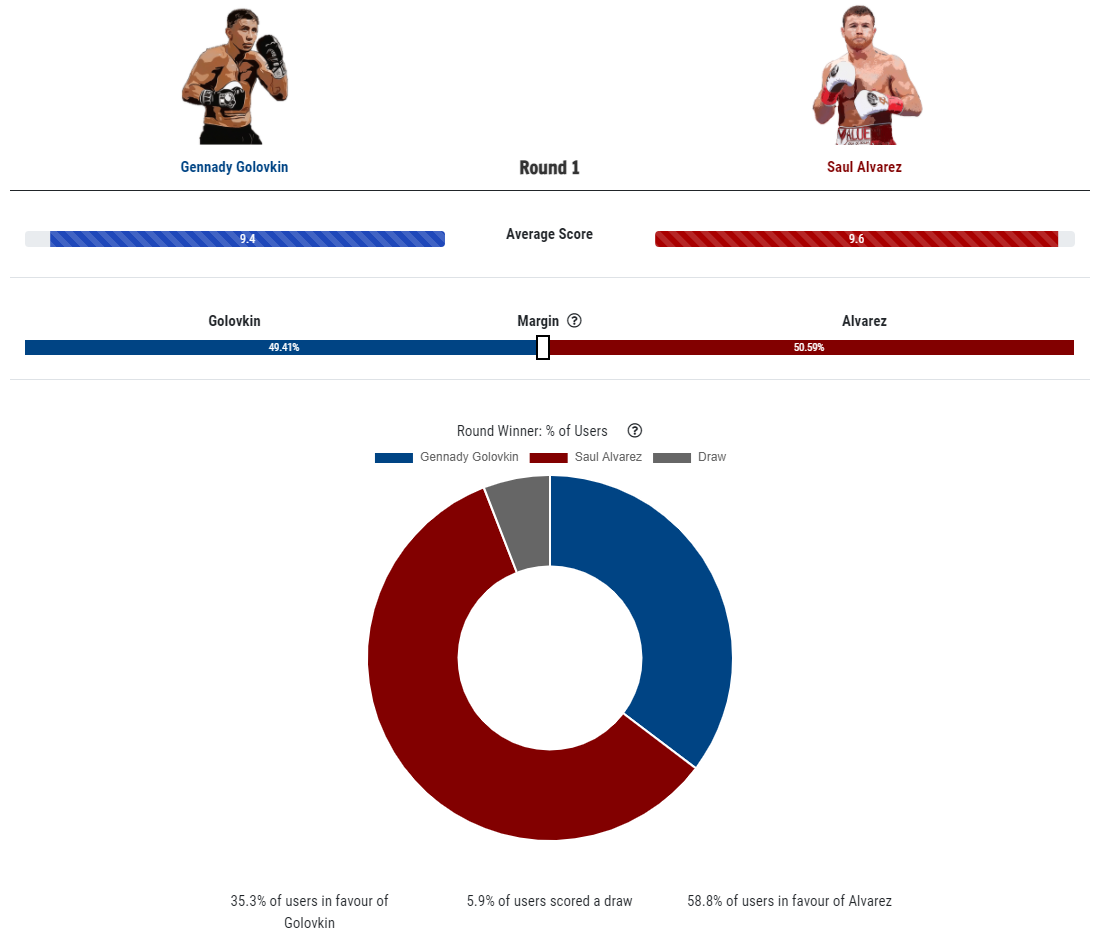 With the additional percentage data being utilised we also have an metric to potentially use in deciding a fight outcome. If the scores are event at the end, go to who won rounds by the biggest majority!

Of course, this is all a big ask. We often hear in the aftermath or fury and uproar of a dodgy scorecard how there will be investigations and hearings into what happened. But we also equally hear of unquestioned support and backing of the judges decisions. So this would be a very tough nut to crack in getting any kind of changes to be embraced.

We are just a very small community. We don't have many members, or a big voice. But we do have a solution to the current issues we see time and again. With a mass of support from boxing fans, media, publications, broadcasters and even boxers and promoters, maybe changes could happen!

Revolution always starts with noise and demand. Since 2017 when we started this project, the frequency of bad scoring seems to have accelerated rather than improved. The noises, grumbling and fury on social media has also grown, and yet still nothing get's done.

It's time to take some kind of stand, to try and drive change. We're not just moaning about the wrongs of the current system, but we're proposing actual, implementable solutions. We need the backing and support, a wall of noise, from fans and those within boxing in order for those in authority to take notice and decide to make changes. It just takes 1 governing body to lead the way, and others may follow!

So please tweet, share and shout about our proposed system for boxing scoring changes to take a step in the right direction to improve our sport!