Golovkin - Alvarez has given us more ammunition!

It was just hours before the big fight in Vegas and plenty of scrambling around with the code base that we got our first generation concept ready to make use of, primarily for Twitter users.

Fight Score will take some time to get out there, be understood of its goal, why its needed and to ultimately be adopted by fight fans in the long term. Yet it seems our simple concept, this slight addition to the existing scoring of boxing bouts, is becoming more and more justified every week.

It's now the morning after the night before and the biggest fight in boxing has kicked up a huge stink! We are here AGAIN!

"How have they scored the fight like that!?", "What fight was they watching", "...they should never judge a fight again".

Steve Bunce, writing for the Independent highlights a huge issue in his post fight piece. The judge in question, who has stolen the lime-light, walks away from the fight no questions asked. Bob Bennett who appointed the judges for the fight defended her as having "an off day".

There is, apparently, hearings for the judges in cases like this, but little is ever heard about it, and the same judges reappear on their stools ringside soon after. 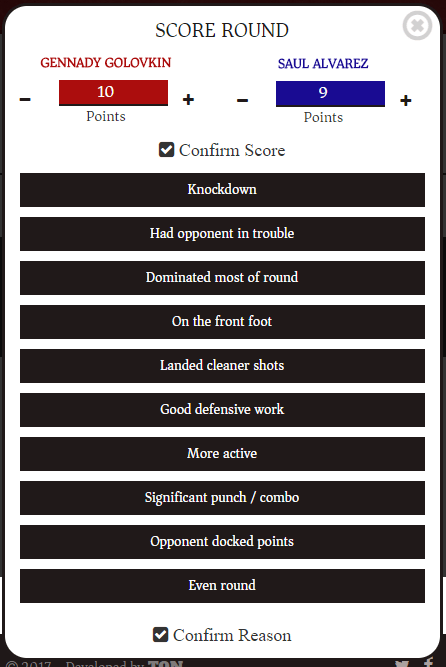 We simply ask for transparency

In a sport where the outcome can depend wholly on the opinions of people, there will always be differing views, it's totally subjective based on what a person sees and likes.

We will never change the way the sport is judged, but what ALWAYS stands out in these times of dismay and bewilderment is the question of how and why!? How did they achieve those scores? Why did that fighter win that round!

And THAT is what Fight Score aims to provide the answer for! Our basic system asks the user to provide a single reason from a list as to why they awarded that round. Justify it!

If Byrd had to appoint reasons, a stamped snapshot of her decision making at that very moment, it would provide some transparency in her thinking, and it can also be used in any "hearing" or interrogation which may stem from the result of a fight.

While methods of training, conditioning, safety have all improved and moved on with modern times, the judging aspect hasn't!

We still have 3 people sat ringside with pieces of paper and pencils marking out their scores and then taking an age to add them up at the end of the fight.

We have seen integrated into live fight broadcasts  punch stats and polls, and there really is scope that judges can adopt modern technology to assist with their plight.

Our scoring app is quick and simple to use in the minute between rounds. It can also be extended for more in depth reasoning (i.e time stamping sections in a round when scoring punches landed), which we will be working on.

And finally at the end of the fight, all scores will be ready calculated, so there will be no delay in announcing the winner or any confusion with handwritten scorecards.

There is also scope for the scorecards to be made public immediately after the fight. Boxing broadcasters can show the cards and they can be analysed as part of the after fight discussions.

Of course, as our own product, and having just got it all set up, we used the scorecard for the fight and published it at the end.

It got reaction from fight fans, quite a lot of negative infact, but THAT is exactly the point in our concept!! We gave a transparent view of why we awarded the rounds at we did, and it got people talking and agreeing/disagreeing and asking questions. Perfect!!